Readers who like stories about odd characters who find themselves in strange situations, will love this new collection by Rivka Galchen.

As strange as the characters are, though, it’s easy to relate to them.Who hasn’t felt what this character in “The Lost Order” feels so keenly?

“But one day I woke up and heard myself saying, I am a fork being used to eat cereal. I am not a spoon. I am a fork. And I can’t help people eat cereal any longer.”
After a strange caller angrily denounces her for a missing Chinese take-out order, the narrator of “The Lost Order,” comes to some startling conclusions about her marriage and herself.

“The Region of Unlikeness,” is about another lost soul who befriends two eccentric intellectuals at a coffee shop. She is secretly attracted to one of them and repelled by the other.

“Wild Berry Blue,” is a wonderful coming-of-age story about a girl who has a crush on an ex-junkie who works at her favorite McDonalds.

In one story, “Once Upon an Empire,” a likable but possibly deranged narrator, loses all of her belongings. No one steals them; instead, in a magical realism way, they become mobile and literally walk away from her apartment.

She finds them in a dumpster but is reluctant to identify them to the police.

Less successful stories included in this collection are “Dean of the Arts” or “The Late Novels of Gene Hackman.”

Galchen’s collection was long-listed for the 2014 Scotiabank Giller Prize.

The Chaos is an online journal of creative nonfiction. We’re seeking submissions for our summer 2017 issue from emerging and established writers. We are drawn to narrative, personal essays rooted in scene. Show, don’t tell. Send us your best work. 500-7000 words. Visit our website for additional guidelines and to submit: www.thechaos.life.

Submitted by Kristen Luby on April 25, 2017 Encourage summer listening at your library! SYNC is a free summer audiobook program for teens 13+ (and adult listeners, too!). From April 27 through August 16, 2017, SYNC will give away two complete audiobook downloads each week, including four outstanding Listening Library titles! Visit www.audiobooksync.com each week for two new audio offerings. Once downloaded, these audios are yours to keep—but hurry, each title is available for one week only!

“The first draft is just you telling yourself the story.”–Terry Pratchett

In Karen Joy Fowler’s We Are Completely Beside Ourselves, the narrator begins in media res.

In no way is We Are Completely Beside Ourselves a typical missing person story. There’s a lot more at play. Rosemary’s brother is a domestic terrorist and Rosemary’s sister is a chimpanzee for starters. Her father is a psychologist who is keen on treating his children like the psychological subjects he is studying.

Tragic and compelling, this novel explores many tantalizing subjects such as the fallibility of memory, the notion of humanity, and the debilitating effect of family secrets.

For another book about a family’s misadventures in animal experimentation, try We Love You, Charlie Freeman by Kaitlyn Greenidge. 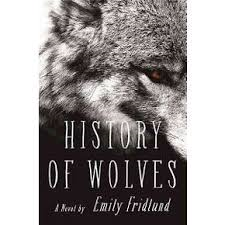 For a coming-of-age story that transcends genre, read Emily Fridlund’s History of Wolves.

One of the central questions in this tale is culpability.

She’s a kid surrounded by adults–her parents, Mr. Grierson, the Gardners who shirk their duties and blame others for mistakes they make.

The worst offender is probably Patra who blames illogically blames Madeleine for the death of her four-year-old.

Then there’s Mr. Grierson, her teacher, who is reprehensible but not guilt of what Lily and the police charge him with. Madeleine tracks him to Florida after he gets out of prison. She writes letters to him reminding him but  he seems to have forgotten her.

Though Madeleine is expert at hiking and traversing the streams the woods, she is less expert at deciphering social cues or understanding human relationships. Perhaps that is why she is fascinated by Patra and Leo’s strange relationship.

However capable she is at wilderness survival, Madeleine is strangely powerless when faced  with Leo’s religious obsession or Lily’s duplicity.

“So long as you write it away regularly nothing can really hurt you.”  Shirley Jackson.

I think this is why so many writer do what they do. Writing is a snapshot of a particular time, often painful, but sometimes joyful. It’s a memory, a recording, that makes the ordinary details of life extraordinary.

Years after a horrific crime, Tessie, the only survivor in the “Black-eyed Susan” murders steps forward. She is beginning to doubt that the right person has been convicted for the heinous crime.

Tessie was nearly killed and blinded by a “monster.” After the  horrific attack, Tessie suffers memory loss and psychological blindess–a conversion disorder.

Heaberlin unveils the chilling story in back and forth chapters that contrasts events near the time of the crime with its aftershock seventeen years later.

If Tessie does not change her testimony, an innocent man could face the death penalty. Tessie, however, is reluctant to delve into her past. After all, she has her own daughter to protect from the media’s harsh glare.

Adding to the tension is the fact that Tessie thinks she is going insane.

Immediately after the crime she begins to hear the voices of the other Susans in her head. The grown-up Tessie thinks her monster has been planting batches of blacked-eyed susans to traumatize her.

The twist at the end packs a wallop. Heaberlin’s latest is for fans of Gillian Flynn, Paula Hawkins and Brunonia Barry.

The Small Hand by Susan Hill

On his way back from a client on the coast, Andrew Snow, a rare book dealer, cuts through the Downs and has an odd experience. After leaving the main road, he gets lost and finds himself inexplicably stopping at a dilapidated mansion. On The White House grounds, he feels the presence of a small hand gripping his own but yet there’s no visible child. Is this a ghost or is he going mad like his brother, Hugo? Why do the gardens and pool fascinate him? Why does it all seem so achingly familiar?

Susan Hill (The Woman in Black) does a masterful job of creating tension and suspense in the marvelous ghost story. Hill is particularly good and creating psychological portraits that ring true. Infused with the supernatural, this novelette also revels how skillfully we deceive ourselves as adults. Grown-ups falsely believe their past is past–that their childhood fears and offenses are long buried.

I know Chris Pratt was talking about acting roles but this is so true about everything:

“It’s all divinely planned…the “no’s” you get today might mean a more powerful “yes” in the future.”